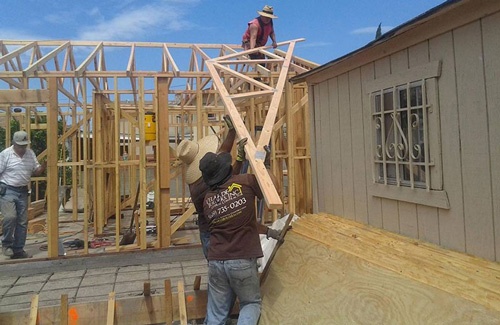 There has been a surge in the construction of accessory dwelling units statewide, fueled by new regulations, and now there is another California Senate bill intended to make them even more feasible.

It is currently very difficult to convert an unused ground floor retail space back into its original use as residential housing under existing state law, according to Allen Matkins attorney Matthew Fogt.

San Diego was among numerous cities nationwide in the 1990s that mandated a retail component be at the base of multifamily complexes. Many of those spaces ended up being empty for long periods, however.

"Ground floor retail never pencils," Fogt said. "You should be able to convert these spaces."

California's existing planning and zoning law allows for the creation of accessory dwelling units, or ADUs, by local ordinance. However, it also requires a local agency to ministerially approve applications for a building permit within a residential or mixed-use zone.

The proposed Senate Bill 778 would allow ADUs to be located within a former first floor commercial space with one major caveat. The bill would require the space to be empty for at least six months before the submission of a building permit application.

Under this bill, the local permitting agency would be required to allow as much as 25 percent of the units in such a complex be built as ADUs.

The bill also would allow ADUs to be constructed in former office and industrial spaces, as well, with the same restriction they be empty for at least six months.

Fogt said previous legislation has been enormously helpful to the ADU cause.

Last session, the California Legislature passed a measure that restricts the homeowners associations from regulating ADUs.

The occupant of an ADU also is no longer required to be the owner of the unit or an immediate relative, such as a grandmother, according to Fogt.

Cities such as San Diego have been reducing or eliminating their building fees as a way of fostering new units.

Just how many ADUs have been built in the past year is difficult to quantify because there has been such a surge of them since the pandemic started, according to Fogt.

"We are seeing [increasing permits] all over the state," Fogt said.

Last September, officials from modular home and ADU developer Steelblox referred to San Diego County as the most progressive county for ADUs in the state.

The report said the city of San Diego has helped enormously by waiving a $15,000 permit and development fee in order facilitate the ADUs.

There are many types of ADUs currently being permitted.

Fogt said he has seen a lot of cases where the ADU is built within the confines of a single-family home.

Ramon Velarde, CEO and owner of Chula Vista-based Velarde Builders, said his company has been doing a lot of garage conversions. He also develops stand-alone ADUs as well as those ADUs built within the confines of a single-family home.

"It depends on the lot size," he said.

Velarde, whose company has about 60 ADU projects planned this year, said there is no question the loosening of ADU restrictions made what could have been a difficult year a whole lot easier in 2020. It also kept Velarde and his 15 employees working.

Kalani Creutzburg owner of North Park-based ADU Geeks, said he started his business out of a garage 15 months ago. The company handles every part of the ADU process, from design through construction.

"We now have 67 ADU projects under our belt," he said. "Everybody can afford these. Money is so cheap these days, you could finance these over 30 years, and you could rent them out at a premium."

Creutzburg said another advantage to building ADUs is his belief that they are much less likely to get overbuilt than traditional market-rate apartments, which are almost always of the luxury variety.

"We should get a solid four to five years out of this trend," he said. "And it will help keep homeowners afloat."